NOTE: Sharding is a new feature with some limitations. Please read them before using it.

OrientDB supports sharding of data at class level by using multiple clusters per class. Under this model each cluster keeps a list of servers where data is replicated. From a logical point of view all the records stored in clusters that are part of the same class, are records of that class.

The following is an example that splits the class “Client” in 3 clusters:

This means that OrientDB will consider any record/document/graph element in any of the three clusters as “Clients” (Client class relies on such clusters). In Distributed-Architecture each cluster can be assigned to one or more server nodes.

Shards, based on clusters, work against indexed and non-indexed class/clusters.

You can assign each cluster to one or more servers. If more servers are enlisted then records will be copied across all of the servers. This is similar to what RAID does for Disks. The first server in the list will be the master server for that cluster.

For example, consider a configuration where the Client class has been split in the 3 clusters client_usa, client_europe and client_china. Each cluster might have a different configuration: 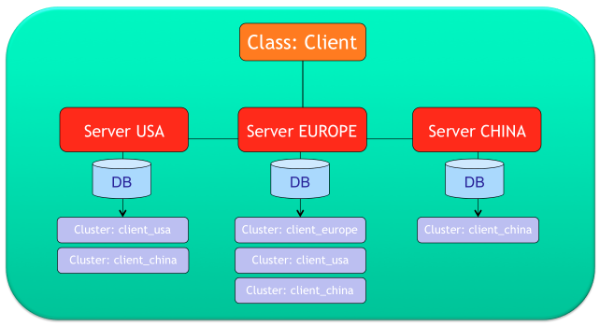 In order to keep things simple, the entire OrientDB Distributed Configuration is stored on a single JSON file. The distributed database configuration for Multiple servers per cluster JSON object looks somethings like this:

OrientDB automatically creates a new cluster per each class as soon a new insert operation is performed on a class where the local server has no ownership. When a node goes down, the clusters where the node was master are reassigned to other servers. As soon as that node returns up and running, OrientDB will reassign the ownership of a cluster to the server specified in the owner property if specified, otherwise to the server name indicated as suffix of the cluster (<class>_<node>). For example the cluster customer_usa will be assigned automatically to the server usa if exists in the cluster.

This is defined as "Cluster Locality". The local node is always selected when a new record is created. This avoids conflicts and allows for the insert of records in parallel on multiple nodes. This also means that in distributed mode you can't select the cluster selection strategy, because "local" strategy is always injected to all the cluster automatically.

If you want to permanently change the mastership of a cluster, rename the cluster by changing it’s suffix to that of the node you want assign as master.

In the configuration above, if a new Client record is created on node USA, then the selected cluster will be client_usa, because it's the local cluster for class Client. Now, client_usa is managed by both USA and EUROPE nodes, so the "create record" operation is sent to both "usa" (locally) and "europe" nodes.

Update and Delete of records

Updating and Deleting of single records always involves all the nodes where the record is stored. No matter the node that receives the update operation. If we update record #13:22 that is stored on cluster 13, namely client_china in the example above, then the update is sent to nodes: "china", "usa", "europe".

Instead, SQL UPDATE and DELETE commands cannot run distributed in case of sharding. For example, the SQL command delete from vertex Client works if the Client class is replicated across all the sevrers, but it won't work if the class is sharded by throwing a ODistributedOperationException exception with the following reason: "because it is not idempotent and a map-reduce has been requested".

NOTE: if something happens during the iteration of the resultset, you could end up with only a few records deleted.

All queries work by aggregating the result sets from all the involved nodes.

Example of executing this query on node "usa":

Since local node (USA) already owns client_usa and client_china, 2/3 of data are local. The missing 1/3 of data is in client_europe that is managed only by node "Europe". "So the query will be executed on local node "usa" and remote node “Europe”. The client will be provided the aggregated result back.”

You can query also a particular cluster:

In this case the local node (USA) is used, because client_china is hosted on local node.

OrientDB supports MapReduce without Hadoop or an external framework like Spark (even if there is a connector), but rather by using the OrientDB SQL. The MapReduce operation is totally transparent to the developer. When a query involves multiple shards (clusters), OrientDB executes the query against all the involved server nodes (Map operation) and then merges the results (Reduce operation). Example:

In this case the query is executed across all the 3 nodes and then filtered again on the starting node. 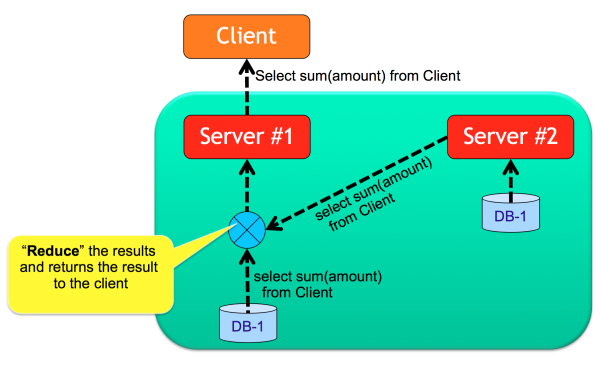 The application can decide where to insert a new Client by passing the cluster number or name. Example:

If the node that executes this command is not the master of cluster client_usa, an exception is thrown.

OrientDB guarantees strong consistency if it's configured to have a writeQuorum to the majority of the nodes. For more information look at Split Brain network problem. In the case of Sharding you could have a situation where you'd need a relative writeQuorum to a certain partition of your data. While writeQuorum setting can be configured at database and cluster level too, it's not suggested to set a value less than the majority, because in case of re-merge of the two split networks, you'd have both network partitions with updated data and OrientDB doesn't support (yet) the merging of two non read-only networks. So the suggestion is to always provide a writeQuorum at least at the majority of nodes, even with sharded configuration.

All the indexes are managed locally by a server. This means that if a class is spanned across three clusters on three different servers, each server will have it’s own local indexes. By executing a distributed query (Map/Reduce like) each server will use own indexes.

With Community Edition the distributed configuration cannot be changed at run-time but you have to stop and restart all the nodes. Enterprise Edition allows to create and drop new shards without stopping the distributed cluster. 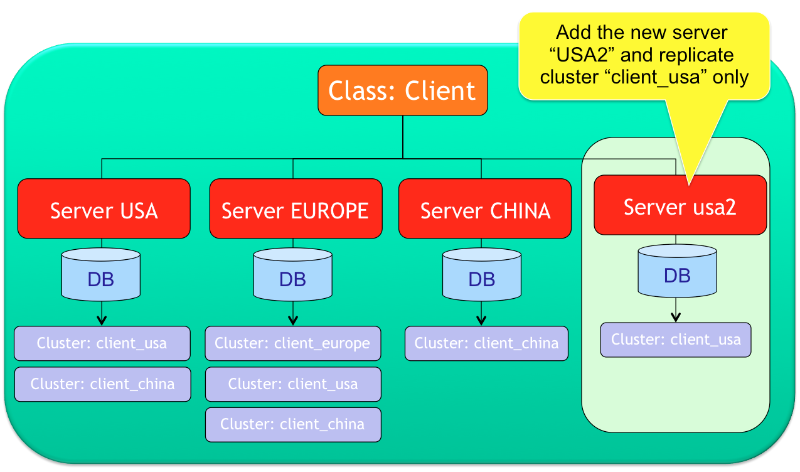