All you need is to use the tag "dataCenters" in your default-distributed-config.json configuration file. This is the format: 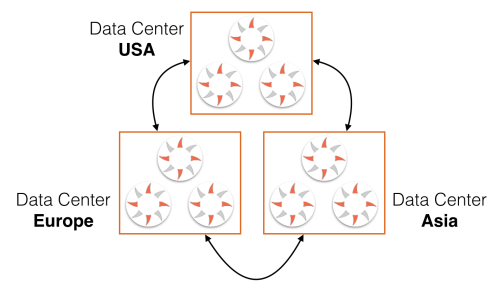 Example about the configuration of 2 data centers, "rome" and "austin", with respectively 3 and 2 servers.

If a write operation is executed on the server "europe-0", the quorum used will be majority, but only between the servers located in the same data center: namely "europe-0" (the coordinator), "europe-1", and "europe-2". Since the coordinator writes in the database before distributing the operation, the write operation succeeds as soon as at least one other local server ("europe-1" or "europe-2") responds with the same result. The rest of the replication to the other data centers will be executed asynchronously.

In order to automatically manage conflicts, the suggested configuration is always to keep an odd number of servers whether you use multiple data centers or not.